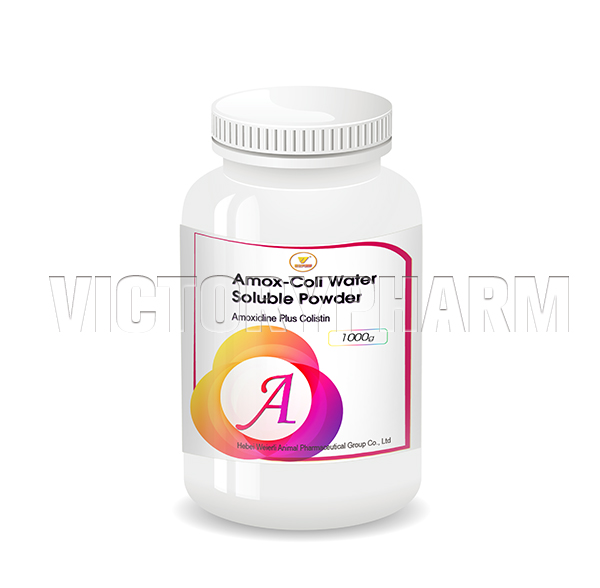 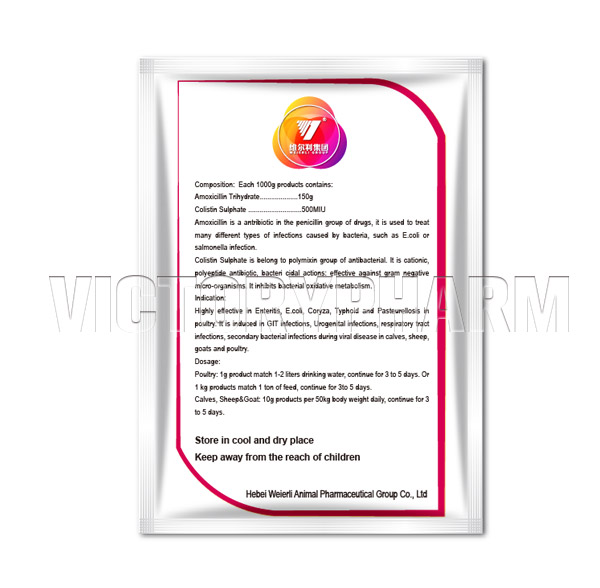 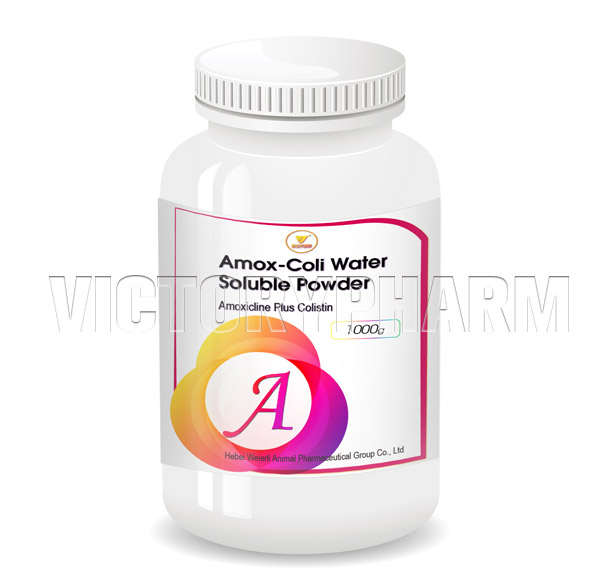 The combination of amoxycillin and colistin acts additive. Amoxycillin is a semisynthetic broadspectrum penicillin with a bactericidal action against both Gram-positive and Gram-negative bacteria. The spectrum of amoxycillin includes Campylobacter, Clostridium, Corynebacterium, E. coli, Erysipelothrix, Haemophilus, Pasteurella, Salmonella, penicillinase-negative Staphylococcus and Streptococcus, spp. The bactericidal action is due to inhibition of cell wall synthesis.

Amoxicillin is mainly excreted in urine. A major part can also be excreted in bile. Colistin is an antibiotic from the group of polymyxins with a bactericidal action against Gram -negative bacteria like E. coli, Haemophilus and Salmonella. Since colistin is absorbed for a very small part after oral administration only gastrointestinal indications are relevant.

Treatment of the disease caused by the following micro-organism susceptible to amoxicillin and Colistin;

Respiratory diseases including CRD and influenza, gastrointestinal disorders such as Salmonellosis and Collibacillosis

- Prevention and treatment of respiratory, digestive, and genitourinary diseases

The following dose is mixed with feed or dissolved in drinking water and orally administer for 3-5 days. Poultry

* When dissolving to feeding water: dissolve immediately before use and use within 24 hours at least.

Store in an airtight container at dry room temperature (1 to 30o C) protected from light.

24 months from date of manufacture

A. Do not use for animals with shock and hypersensitive response to this drug.

Penicillin antibiotics may cause diarrhea by inhibiting the intestinal normal bacterial flora and bring about abdominal pain by gastroenteritis or colitis, digestive system abnormalities such as anorexia,

watery diarrhea or hemafecia, nausea and vomiting and etc.

Administration of high dose (over 600 mg) may bring about nausea, vomiting, diarrhea, etc.

Do not administer with macrolide (erythromycin), aminoglycoside, chloramphenicol, and tetracycline antibiotics.

Gentamicin, bromelain and probenecid may increase the efficacy of this drug.

D. Administration for pregnant, lactating, newborn, weanling and debilitating animals : Do not administer to cows during milking.

When administering by mixing with feed or drinking water, mix homogeneously to prevent from drug accident and to achieve its efficacy.

To prevent safety accidents, keep out of reach of children and an animal.

Observe the preservation instruction since it may bring about a change in effectiveness and stability.

G. Dispose the expired products without using it.

H. Use as soon as possible after opening, the rest of it should be sealed in the original packaging container and store in a dry place protected from light.

Do not use used containers or wrapping paper for other purposes and discard it safely.

It is for animal use, so never use it for human.

I. Consult with your veterinarian.

K. Use after reading the precaution note.

L. Since safety and effectiveness other than the designated animal has not been established, do not use it arbitrarily

M. Record all usage history for prevention of abuse and tolerance appearance

N. Abuse and misuse may bring about economic loss such as drug accidents and remaining animal food residues, observe the dosage & administration.

O. Abuse and misuse may bring about economic loss such as drug accident, so do not administer with drugs containing the same ingredients concurrently.

P. Do not administer it with the drug contains same ingredients concurrently.

S. Consult with doctor as soon as abnormality is found.

T. When administering by mixing with feed or drinking water, mix homogeneously to prevent from drug accident and to achieve its efficacy.